Woodworm are coming - Be prepared as woodworm season gets underway 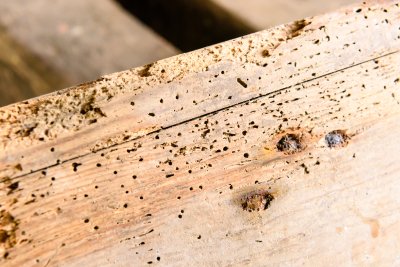 Woodworm are coming - Be prepared as woodworm season gets underway

Temperatures are gradually beginning to rise as the summer season draws closer. However, this warmer weather will also attract insects as woodworm will slowly start emerging from timber to begin mating and laying eggs in your home. The wood-boring beetle normally emerges between April and October to lay eggs so woodworm has the potential to spread to other items in your home. Needless to say, it is important to be able to recognise the signs of woodworm and treat the wood boring beetle before they can cause greater structural damage in your home.

Woodworm is the generic name for the larvae stage of wood-boring beetles. The beetles lay eggs within the timber and the larvae will eat their way through the wood for anywhere up to five years. It then emerges from the timber in search of a mate and they will find new timber to lay its eggs in, starting the whole process all over again. The woodworm creates a series of tunnels which can affect the structural integrity of a building of left untreated.

If the timber has ever had a woodworm infestation, there will small burrow holes in the wood, similar to holes found in a dart board. These holes signify where the beetles have emerged from the wood in order to mate and find a new nearby location to lay eggs. However as these exit holes are evidence of where beetles have burrowed out of the wood, it is not always a cause for concern. It is possible that the infestation is no longer active and that there is no more beetles remaining inside the timber. However, there is no way to determine by burrow holes alone whether or not there are still larvae beetles inside the wood.

Alongside burrow holes, raised “tunnels” within the wood is also common. This indicates the route taken by larvae beetle as it devours its way through the wood.

The greatest indicator of a woodworm infestation is finding dead or alive beetles in close proximity to the furniture or emerging from exit holes in the timber. Beetles generally emerge from the wood in these summer months so this is definitely a sign of woodworm to take note of.

The “Common Furniture Beetle” is a very common woodworm beetle to find in the U.K. As they die shortly after mating it is common to find dead beetles near the furniture or in parts of the furniture such as drawers. These beetles are small and brown in colour.

Fine, powdery dust known as frass may be evident near the exit holes. This dust is known as frass and it is the faeces left behind by larvae beetles. The frass is quite similar to moist sawdust and indicates the furniture is infested with woodworm.

I HAVE NOTICED SOME SIGNS OF WOODWORM IN MY FURNITURE

Not every woodworm infestation is a cause of concern but it is important to establish what damage has been caused by the beetles. If you suspect you have a woodworm infestation in your home, it is strongly advisable to have the timber inspected by a qualified surveyor to establish what damage has been caused and if the wood-boring beetle has spread in other areas of your home.

All content © Wills & Smerdon May 2022 Estate Agency Websites Powered by